The Euro-American “Discovery” Of the Coso Petroglyphs 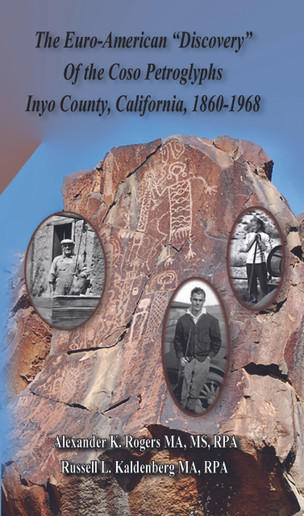 The Euro-American “Discovery” Of the Coso Petroglyphs

The Euro-American “Discovery” Of the Coso Petroglyphs, Inyo County, California, 1860-1968

The Coso petroglyphs, located in southern Inyo County, California, constitute the most concentrated and extensive collection of rock art in the western hemisphere. The majority are on public lands managed by the Navy, within an active military test range, and are now a National Historic Landmark. The Navy has controlled access for safety and security since 1944, which has largely protected the rock art from vandalism and looting. The Maturango Museum has conducted guided tours of the Coso petroglyphs since 1962. Tour participants frequently ask whether the presence of the rock art was known prior to land withdrawal for the Navy in 1944. The answer is a resounding “yes”, and in this book Alexander K. Rogers and Russell L. Kaldenberg trace the “discovery” of the Coso rock art by Euro-American society up to the seminal study of the petroglyphs by Grant, Baird, and Pringle in 1968.

This product hasn't received any reviews yet. Be the first to review this product!

Write your own product review

All prices are in USD.